In late October FMSA raised just under $300M through a secondary which is intended to pay down its $1.1B long-term debt. Share prices have digested the news rather well, while declining along with the energy sector, they are up nearly 6% on this quarter’s earnings release.

During 3Q, FMSA increased sand price ~$2 to $4 per ton which Credit Suisse cites as being the “beginning of the pricing recovery”. As well, frac sand volume growth was 38% QoQ, almost double the industry average, based on CS’s own model. There have been many other analyst firm research findings that sand usage per well has been underestimated, which in conjunction with increased completion activity and continued recovery should be beneficial to FMSA, as well as peers Hi-Crush Partners (HCLP) and US Silica Holdings (SLCA), a name that we covered back in early July.

As with FMSA, SLCA also reported an increase in pricing which, along with demand has so far remained in an uptrend. SLCA expects sequential improvement in both pricing and volumes which could justify further price increases during the current quarter. Management also noted that their order book is at its highest level since February 2015 and that by their estimate, frac crews have increased 16% in September-October period.

Both companies have re-negotiated their railcar leases and purchase commitments, incurring charges but essentially reducing costs of unneeded cars that would go unused. FMSA finished the quarter with 2,850 railcars in storage, down 1,700 from the start of 2016, and also lowered storage costs $1.5M for the quarter.

SLCA reported that around 400 cars were pulled out of storage during 3Q, leaving another ~2,200 in inventory. Management is currently working to defer/cancel 2,500 cars that were due to be delivered over the next few years.

Shares still above rising trendline from January’s lows. Above $9.60, there is very little resistance to $12.80. 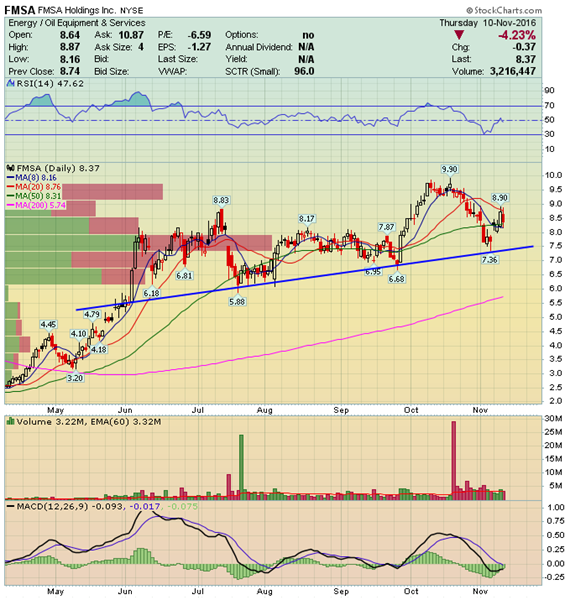 Frac sand sector has been quite active since crude price bottom in early 2016 with all three main players, FMSA, SLCA and HCLP posting multi-fold gains. While the fate of the Energy sector lies somewhat in the hands of OPEC’s November meeting decisions, long term should see continued demand for proppants. Even with he sector’s massively reduced CapEx, there are still over 6,000 dug wells that could generate completion interest.