Since the end of last year, a handful of bullish option trades have taken place. Per the Jaguar Activity Tracker, here are just a few notable entries: 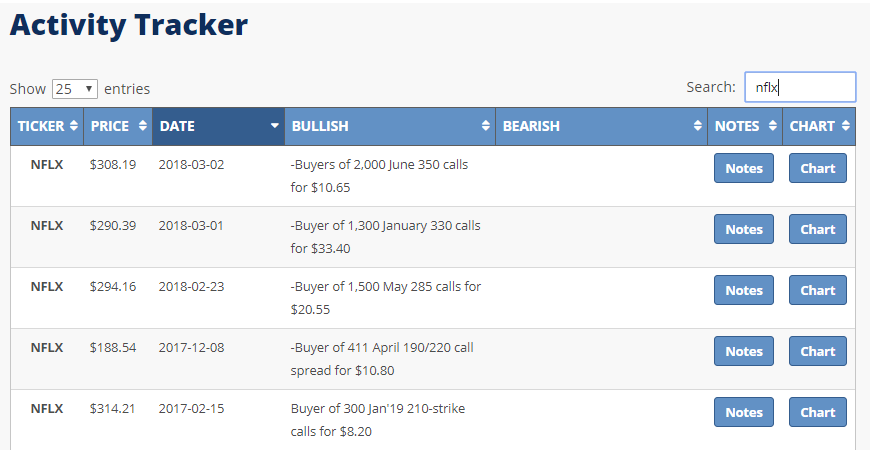 Over the last week, sell-side coverage has ramped up in anticipation of these earnings numbers. As the title “Checking In” suggests, let’s take a look at what analysts are saying:

Stifel – Analyst Scott Devitt is forecasting 1.44mm domestic net streaming subscriber additions in 1Q, ahead of consensus of 1.47mm and the company’s forecast of 1.45mm. For international streaming, they estimate 4.94mm net adds, narrowly ahead of 4.92mm consensus and company guidance of 4.90mm. They estimate +40.1% Y/Y revenue growth in 1Q (just ahead of guidance of +39.8%) which benefits from the October / November price hike in the U.S. and a number of international markets.

The analyst would also go on to highlight a few key points he will be listening for on the call:

• Netflix has recently announced partnerships with various telecom and entertainment services, including: OSN, Altice One, and Sky. They’ll want to know how much, if at all, these partnerships factor into management’s 2Q guidance.

• They expect to hear an update on international growth and will look for timing around content pieces in key markets such as India and Brazil.

• They’d like to hear management’s thoughts on potential vertical integration via studio acquisitions, and the company’s current framework for capital allocation in general. 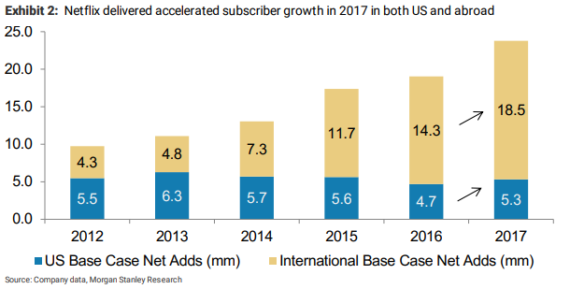 • The core addressable market is large and still expanding

• Netflix’s younger markets (launched 2015 and 2016), which account for the majority of broadband homes outside of China, still remain in the very early stages of adoption.

• In emerging markets like India where pay-TV ARPU is much lower, our relative market attractiveness index still implies appetite for TV consumption, which we believe Netflix is well positioned to capture.

Goldman Sachs – Analyst Heath Terry would raise his price target from $315 to $360 and keep his Buy Rating and say that he believes that Netflix’s strong Q1 content slate, newer distribution partnerships and marketing investments make it likely to report quarterly results that top consensus expectations. Beyond the just completed and upcoming quarters, he continues to believe long-term subscriber growth and profitability will exceed current consensus expectations.

Loop Capital – Analyst Alan Gould writes that after topping expectations in 14 of the past 17 quarters, Netflix will again likely beat its Q1 forecasts for subscriber growth. Mr. Gould notes that the international broadband market remains well underpenetrated at 10-11% vs. 50% in the U.S. The analyst also expects the quarter to offer better than anticipated free cash flow generation, operating margin upside, and content related investment commentary.

Piper Jaffray – Analyst Michael Olson says his firm’s semi-annual survey of over 6,000 teens found that Netflix is taking an increasing share of daily video consumption versus other offerings. Further, fewer teens indicated that their household subscribes to cable or satellite TV. The analyst is confident in continued domestic growth for Netflix “given popularity among the teen demographic.” He would maintain his Overweight rating and $360 price target.

Raymond James – Analyst Justin Patterson’s search and app data analysis indicates U.S. trends remain solid, while international momentum continues. Mr. Patterson is slightly cautious on Q2 guidance given the shifting of House of Cards to Fall 2018 and the presence of the World Cup, but said these are largely timing factors and notes the international business has grown in the past during the World Cup. The analyst said Netflix continues to build its programming lead over competitors and his core thesis of share gains, pricing power, and margin expansion remains intact. He would reiterate his Buy rating on Netflix and raise his price target to $330 from $290. 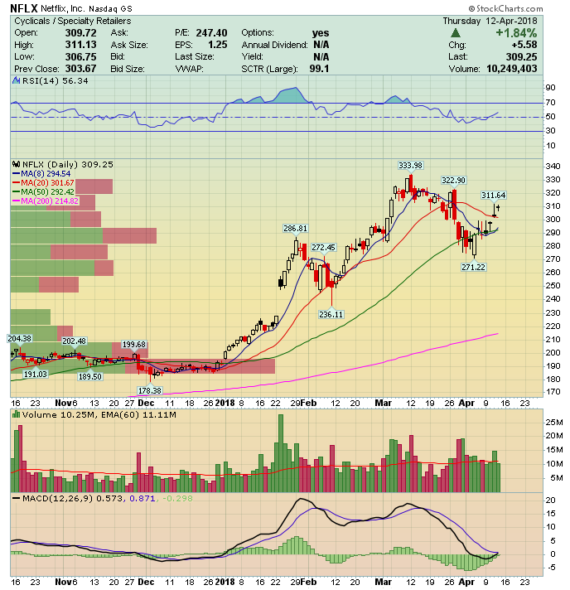