*Please note that at this time, options are not available for this symbol*

Headquartered in Waterloo, Ontario, Descartes Systems provides a variety of software and services related to logistics. The company operates a transaction network called the Descartes Global Logistics Network (or GLN), which provides electronic document exchange across various transportation modes and between enterprises for over 200,000 connected parties in more than 160 countries. 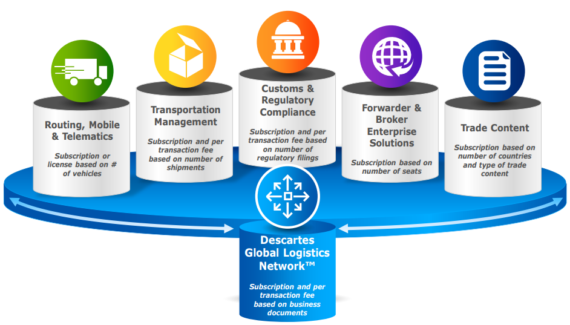 As CEO Ed Ryan stated, the GLN is a place where shippers, transportation carriers, logistics intermediaries and government agencies can share information and leverage that information to make better decisions.

“The network is key, because logistics is a multi-party problem and it’s complicated. Regulations are changing every day, customers are asking for more options every day and companies like Amazon (AMZN) are disrupting the status quo. We are looking to isolate our customers from complexity and give them a competitive advantage in the market. And how we do it with the Global Logistics Network, by bringing together a wide range of capabilities, content connections, all in one place so the customers can number one, research and plan who to do business with and how; two, connect to a global trading community to collaborate and share information; three, execute and monitor shipments and react in real time to changes; and four, analyze data with business intelligence tools to improve for next time.”

Earlier this month, the company would report its Q4 earnings. Here was the breakdown:

Barclays analyst Phillip Huang would maintain his Overweight Rating and $33 price target on the stock in a post-earnings note and say, “We believe DSGX is a multi-year growth story that continues to fly largely under the radar for investors outside of Canada. While DSGX trades at a premium of ~22.7x EV/NTM EBITDA, we argue a business with such: 1) high visibility of revenues, 2) consistent mid-teens EBITDA growth profile, 3) scalable products driving margin expansion, 4) attractive M&A pipeline, and 5) strong management track record, deserves a premium to its comps, particularly as the story becomes bigger and better understood.”

Canaccord Genuity analyst Richard Davis would also note Descartes Systems reported solid Q4 results. After doing the same in Q3, valuation was stretched. However, with a recent pullback and upward estimate revisions, investors are getting a chance to buy the stock at a comparatively more interesting price. He thinks the shares are a good pick for the “safe harbor” portion of an investment strategy. Davis reiterated his Buy rating and $34 price target.

On the Q4 conference call, CEO Ed Ryan would say that in the fiscal year just ended, they added even more customers and solutions to the Global Logistics Network, and they’ve already kicked off 2019 with a new addition to the family with Aljex, an acquisition that complements their ongoing investment in their MacroPoint business.

It should be noted that the company is no stranger to deals. Over the past decade,Descartes has acquired 39 different companies. Below is a quick snapshot of its most recent acquisitions: 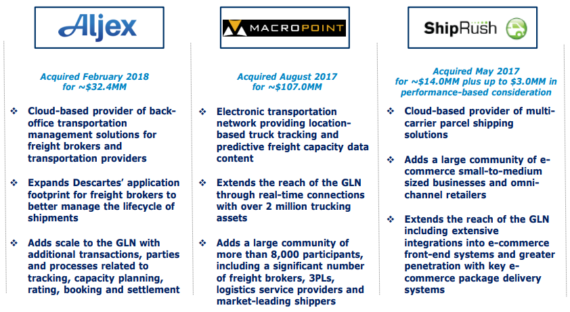 More than 6 months later, management noted that MacroPoint has remained on a strong growth trajectory post the acquisition. Technical integration and cross-selling efforts are well underway, and Descartes is seeing strong interest from its partner channel. CEO Ed Ryan would specifically say, “Our partner community has been very interested as well. We’ve been working hard to put integrations in place with the larger partners like SAP whose customers are increasingly asking for shipment visibility.”

RBC Capital analyst Paul Treiber, in a March 6th note, would say note that Descartes disclosed that the acquisitions of ShipRush, PCSTrac, and MacroPoint contributed $6.1MM revenue Q4, above their estimate of $5.0MM. RBC believes the majority of the difference relates to MacroPoint, which suggests that the business is seeing material growth above their estimates. “The business appears to be tracking to $15MM annualized revenue vs. our estimate of $12.5MM. We believe that MacroPoint sustaining rapid growth would drive upside to Descartes’ organic growth rate over time.”

Barclays believes that combining MacroPoint with Aljex will allow DSGX to develop a solution to help customers unlock transportation capacity, which management views as a significant growth opportunity. With relatively short sales cycles, Barclays sees some low hanging fruit for initial cross-selling, which could accelerate organic growth to the highest level DSGX has ever seen in a few quarters.

Descartes looks to be positioned to address the challenges facing the global logistics industry, given its footprint and the breadth of its technology platform and the fact that the industry has historically under-invested in technology, leading to over reliance on manual processes.

Following the company’s User Conference, RBC Capital would comment that several recent acquisitions move Descartes into software for managing parcel fulfillment and logistics. The acquisitions further increase Descartes’ exposure to B2C eCommerce, which augments the company’s mobile, routing and telematics business used to help manage eCommerce deliveries for customers like Home Depot (HD) and Best Buy (BBY). Even B2B customers are now looking for eCommerce-like features which is driving demand for real-time freight visibility. Unlike new entrants, Descartes does not plan to disintermediate freight forwarders and brokers, but instead is looking to empower them. 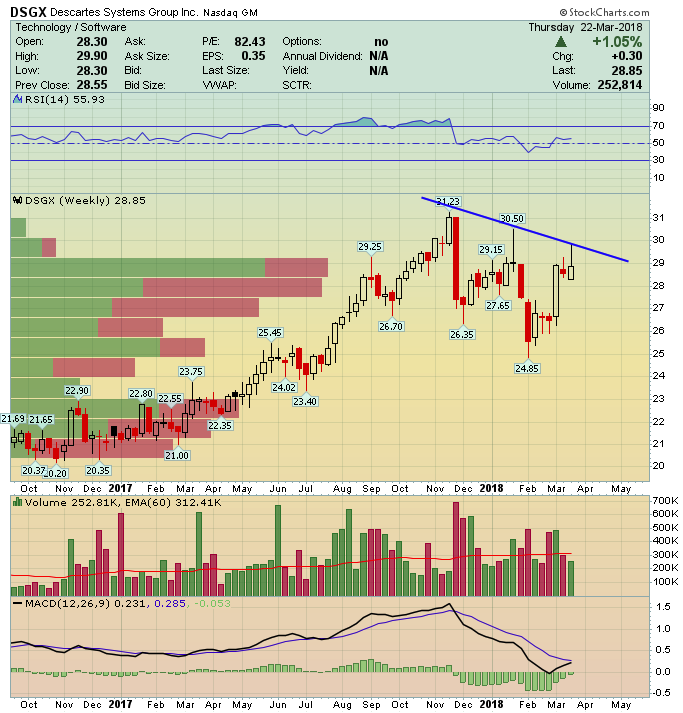