Outfront Media is a provider of advertising space on out-of-home advertising structures and sites with its portfolio primarily consisting of billboard displays, which are principally located on the heavily traveled highways and roadways, and transit advertising displays operated under multi-year contracts with municipalities in various cities across the United States and Canada (Examples and Revenue Breakdown Shown Below). 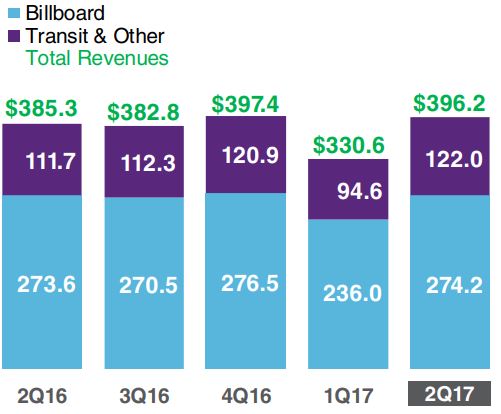 The company would say that the 3 advertising categories with the strongest U.S. growth in dollar terms for them in the second quarter across both billboard and transit were 1. Technology, 2. Health and Pharma, and 3. Food and Beverage.

Looking at technology, advertising was up over 25% Y/Y with some of the big names in the group, Amazon (AMZN), Apple (AAPL), Google (GOOG), Netflix (NFLX), Snapchat (SNAP), and Facebook (FB), collectively increased their spending with us, significantly. This is an example of an increasingly important category for them. Looking back, it was just 1% of revenues in 2007 and it’s grown steadily to 5% of revenue as of the second quarter.

They also spoke highly of their recent Canadian acquisition. For those that do not know, the company announced in mid-June they acquired a leading portfolio of digital billboards in Canada with locations in Toronto, Montreal, Calgary, Edmonton, and Vancouver. The transaction was structured as an acquisition of the equity interests of certain subsidiaries of All Vision, which operated under the Dynamic Outdoor name. The company paid approximately $94.4M for the portfolio of assets.

CFO Donald Shassian would say, “Our Canadian acquisition only closed on June 14th and we are already seeing good traction in the third quarter as the new digital billboards, combined with our legacy static and digital displays, has doubled our daily audience impressions in the market and gives us a leading platform for brands in the top markets in Canada.”

Finally, CEO Jeremy Male would go on to provide the company’s outlook for the remainder of the fiscal year. He said, “We expect revenue growth to be in the low single-digit range with good local growth partially offset by some continued softness in national and with transit, once again, outperforming billboard.“

Looking at the company’s Investor Relations page, CEO Jeremy Male will be speaking at the Goldman Sachs Communacopia Conference next week on September 13th at 1:15PM ET.

In addition, the other catalyst on the horizon is regarding the New York Metropolitan Transportation Authority (MTA). Taking a look at the Q2 earnings transcript, we find the following comment made by the CEO:

“In closing, before I turn the call over to questions, I’d like to update you on the New York City transit renewal. Based on public comments, the MTA expects to make an announcement regarding the outcome of the bid process at its September 25 board meeting. So the key takeaway is that the process is very active and now appears to be nearing a conclusion.”

For reference, when I took a look at the MTA website, the bid process I believe they are referring to relates to this “Enhanced Stations Initiative Program.”

Wall Street currently has 4 Buy Ratings and 2 Hold Ratings on the stock with a consensus price target of $29. Some recent actions include:

Barrington Research – Last month, the firm lowered its price target on Outfront Media to $26.00 (from $29.00) while maintaining an Outperform rating. They said 2Q revenues of $396 million, up nearly 3%, came in somewhat above the $388 million estimate. U.S. revenues of $367 million were 3% above the $357 million a year ago. AFFO was lower at $78.1 million, but above estimates, driven by better-than-expected OIBDA, offset in part by higher maintenance cap-ex.

Loop Capital – In mid-July, analyst David Miller reiterated his Buy rating and said his contacts within the media buying community are discussing a “spillover effect” from the much better than expected TV upfronts that is causing certain advertisers to be priced out of television and move to out-of-home instead. The greatest beneficiary could be Outfront Media because much of its revenues come from national advertisers, compared to competitor Lamar Advertising (LAMR), which is more locally focused. 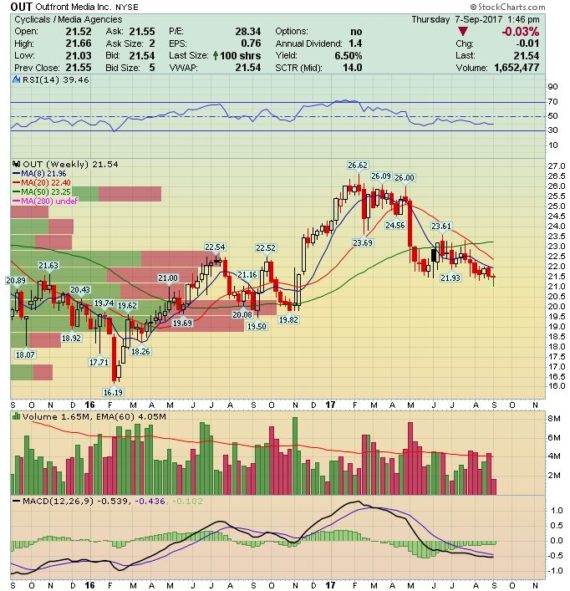