Starbucks (SBUX): All the Coffee in China

Starbucks (SBUX) is the world’s largest coffee-house chain with  23,768 stores worldwide and more opening every day. Its closest competitor is McDonald’s (MCD) McCafe with around 5,100 locations. At its IPO in 1992, SBUX had 140 outlets and $73.5 million in revenues. In 2016, it is expected to earn around $5.37 billion. SBUX releases 3Q earnings July 21st after-hours.

Let’s start with the bad

Starting October 3rd, all US employees will get a 5% or greater raise which in itself is not a bad thing, aside from a lower bottom line. The company also raised beverage prices by 10 to 30 cents as of mid-July which could have some initial negative perceptions, albeit minimal. Foreign exchange impact still persists, specifically from the UK where 3% of revenue is derived from. Mostly, there are differing opinions on US same-store-sales which could drag down share prices if they turn out to be below 6%.

Now onto the good

USA – The only one of the top 8 Global countries to see declining coffee consumption by volume. However spending has actually gone up due to consumers switching largely to single-serve pods (ie K-Cups, Tassimo). Pre-packaged single-serve is less wasteful of coffee grounds but carries with it an increased price premium and as a consequence, US spending on coffee has increased for the past three years. While Americans overall drink more coffee than any other country, the per-capita consumption is ranked 16th in the world.

China – SBUX’s second largest market after the US is China with over 2,200 locations open as of this writing, including two in Shanghai Disneyland, and another 1,200 projected by 2019. China’s middle class population is on track to double from 300 million in 2016, to 600 million by 2022, ensuring a steady growth of clientele. At this time, Chinese coffee consumption is relatively low, but it has been growing steadily and expected to keep growing at a good rate. Of course SBUX also serves tea which is the traditional beverage . Sales of pod-coffee machines have reportedly surged since 2015 and sales of pre-packaged pods are expected to account for over half of fresh ground coffee sales by 2020, largely distributed by Nestlé with its 72% market share, and with whom Starbucks has distribution agreement in Europe. A similar partnership would most likely take place, if not then perhaps with another company as this market is too lucrative to pass up. 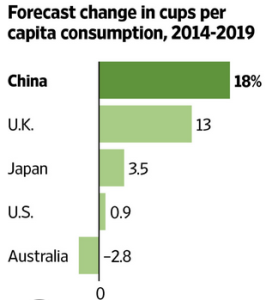 South Africa – Operated under license, in April SBUX opened its first outlet in Johannesburg with much better than anticipated results, and plans further openings in the next two years. While still early in the game and revenue stream very small, it appears to be headed toward success.

K-Cups – SBUX said last quarter that its new agreement with Keurig would allow it to sell directly into key distribution channels, and is expecting to grow sales by 20% in 2016. As for Europe, the Nespresso partnered sales are to start in the Fall.

Ready to Drink Coffee and Energy – This is another segment that SBUX products have successfully entered. In China alone, it is projected to be a $6 billion market. In North America, Starbucks-branded canned and bottled drinks can be found in various grocery aisles, increasing exposure and market reach.

Packaged Bagged Coffee – This is the traditional product, not pods. SBUX coffee can be found at most grocers, big chain stores like WalMart (WMT) and Target (TGT). If there’s coffee, they will be there.

My Starbucks & Mobile Ordering/Payment – Loyalty has its perks. Despite initial complaints, the new rewards program seems to be quite popular. Combined with Mobile app pre-ordering and payment, SBUX is enticing its clientele with custom-designed offers to spend more by making it easy to electronically order ahead of time and pick up their purchase without waiting. A side benefit for the company is in having pre-loaded customer accounts with nearly a billion dollars in total deposited. It would be easy to assume that a good amount of interest could be earned by SBUX without having to do much.

According to NASDAQ’s data, SBUX has 12 Strong Buy, 1 Buy and 5 Hold ratings. Median target price is $68.

Some recent trades of note:

Shares held  $54 price as support since gapping down from April’s earnings, briefly dipped below on Brexit concerns and have rebounded over $55 since. There is major, long term  Volume over Price support at $55.40 and $57. Weekly MACD has crossed Bullish while Daily MACD is slightly high but not overbought. Overhead resistance is at about $59.50. 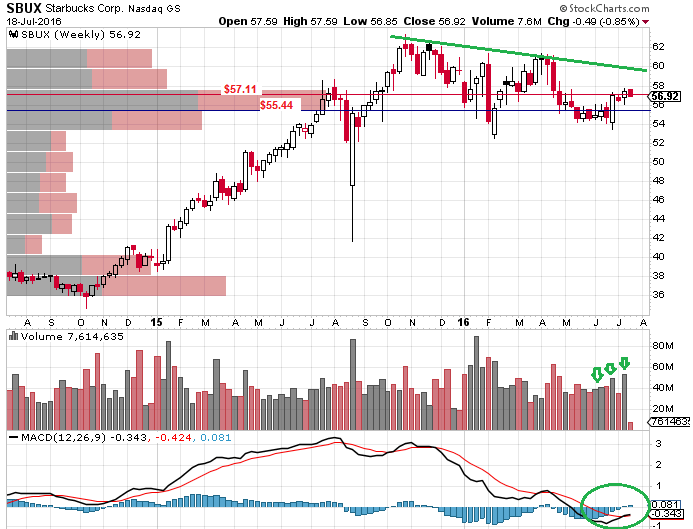 Starbucks should be looked at from a longer term perspective. It is possible that US same-store comps post below estimates  and GBP/Euro related currency impact reduces bottom line this quarter. However investors should not lose sight of all the future growth, primarily headed by Chinese market share, that makes a compelling story.