Stock is up $2.30 or 2.9% today with overall market. On this strength, we like to open a bearish position looking for sell off with earnings coming up on November 25 before market opens. DE has seen steady increase in out of money put open interest in December 80 through 60 put strikes. Today again we are seeing buyers of 8,000 way out of money December 65 puts for 35-40 cents.

At the start of 2015, the FY2016 EPS consensus was at $5.50. Gradually it has been getting cut, currently at $4.35 which spits out forward PE multiple of 18.6x with both top and bottom line revenues remaining under pressure. EPS is now at 3-year low. And most retail sales figures reported via 8K filing shows no sign of turning around. From October 12: 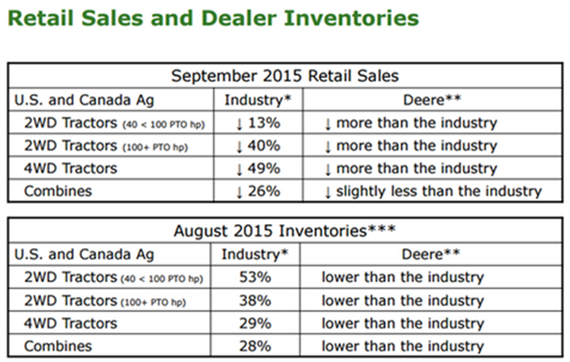 We believe the stock doesn’t deserve to trade a multiple of high teens with numbers like that. In nutshell, our research shows that Deere is operating at close to 50% capacity utilization and future decremental margins are expected to accelerate from 2015 levels as Deere moves closer to breakeven levels of utilization. We also believe that the amount of deterioration in volumes at Caterpillar and likely Kennametal, as well as Terex and maybe AGCO, could be putting these companies in similar situations where relatively small changes (like 10-15% down) could have outsized impacts on profitability. Industrial companies have done huge amounts of work to lower breakevens, but some end markets have been down far and long enough to test the new levels. This is a long way of saying that we are concerned that the 2016 EPS guides from CAT, DE, JOY and maybe KMT and TEX, could be noticeably worse than current consensus estimates. 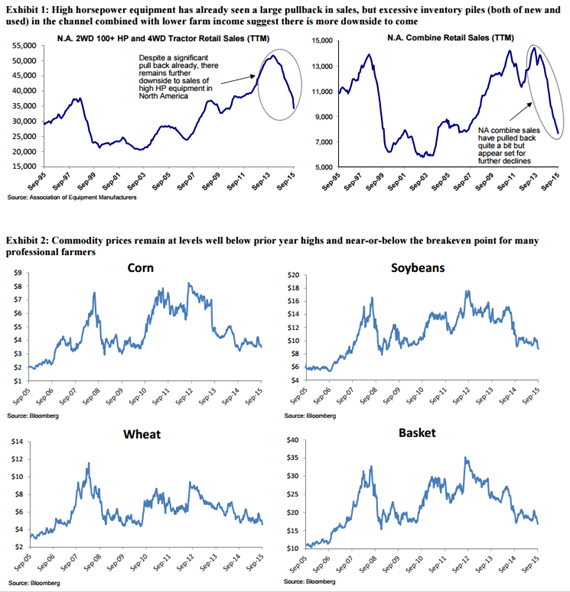 Another way to put it, with top line revenues relentlessly under pressure, managements in selected industrial companies through out in 2015 were able to cut costs to keep margins from declining. But when utilization rates now collapsing, those cuts no longer provide the cushion hence any further pressure on revenues and EPS could collapse significantly. That’s what we are starting to see in DE hence significant risk going into 2016.