HRTX is $1.1 billion development phase biotech with a product called Sustol for the prevention of acute chemotherapy nausea and vomiting. Extension of this drug is to treat post-surgery acute pain conditions. Baker Brothers own 2.9 million shares, which increased last quarter from 2.6 million shares. Other major shareholders include Point72 with 500,000 shares. Back on June 2, large insider buying noted when Director Kevin Tang bought 150,000 shares for $19.30 to $23.84. On March 19 the company reported solid clinical data for Phase 1 study of HTX-011 for prevention of post operative pain. Then on March 28 they reported Phase 3 MAGIC Sustol study met primary end point.

The progress in clinical studies has been incredible. But we believe the stock has a lot more to go. Upcoming catalysts:

Next Few Weeks – FDA acceptance of Sustol NDA submission. Note if approved, this will differentiate Sustol as the only 5-HT3 receptor antagonist approved for this indication, which we view as critical to HRTX’s ability to command a premium price for Sustol

The key here in short term is Sustol. Longer term HTX-011 comes into play as well. We believe Sustol will get approved. The clinical trial was 90% powered for a 10% relative difference in response rate and was able to show a 14.3% relative difference. The secondary endpoint of patients achieving “complete control” was also statistically met and the percentage of patients who experienced no nausea or infrequent nausea during the delayed-onset phase met as well. Also, statistically, more patients in the Sustol arm were satisfied with their therapy, based on a QOL questionnaire. Importantly, there were no clinically significant differences in the rate or severity of adverse events between the treatment arms. No acute HEC results were shared, but management claimed that there was a highly consistent benefit that either statistically met or strongly trended in favor of Sustol.

The study was powerful and outcome was excellent. The FDA should accept the NDA with final approval in Q1 of 2016. 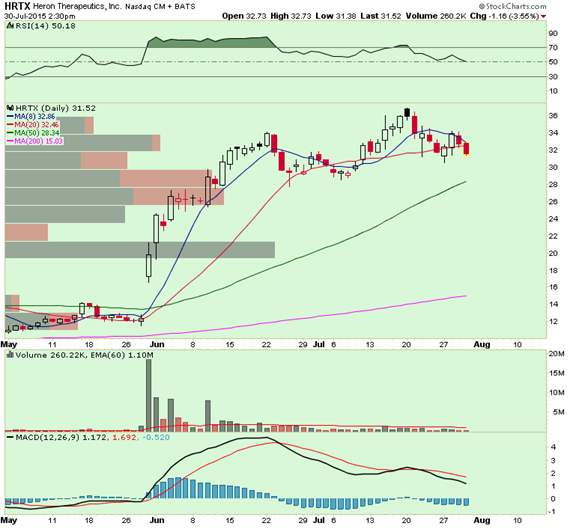