Last month, Needham pointed out that this summer, Axonics (AXNX) was planning a series of physician seminars in Tampa, FL, Dallas, TX, Irvine, CA, Nashville, TN, and Boston, MA. This past week, Truist analyst Kaila Krum was out with a note after attending one of these seminars. As the analyst stated, the purpose of this event was to support the launch of the company’s Bulkamid bulking agent that is used for the treatment of female stress urinary incontinence. SUI is described as the unintentional passing of urine during activity or exertion, such as during coughing, laughing, or exercise.

Several physicians Truist spoke with expect Bulkamid will be a first-line option for their patients who present with SUI, given the strong efficacy and patient satisfaction supported by data, as well as the fact that there have been no serious complications with the product. While there’s a learning curve with the product, they were surprised with how quickly some of these physicians have ramped their procedure volume (one physician went from 5 bulking cases pre-Bulkamid, and is now annualizing at 75 Bulkamid cases). Management has been pretty conservative in its messaging around the potential of Bulkamid, though they would be surprised if Bulkamid weren’t a meaningful contributor in the coming months.

Meanwhile, during the seminar, Axonics had three surgeons on a panel to discuss their early experience with Bulkamid and answer questions for the audience. The panelists included Dr. Laura Giusto (Chesapeake Urology Associates in Owings Mills, Maryland), Dr.Esther Han (Orlando Health in Orlando, Florida), and Dr. Sagar Shah (McIver Clinic in Jacksonville, Florida). “Most of the panelist views were consistent with those of other individual physicians we spoke with less formally during the seminar.”

In published survey work presented during the seminar (over 200 patients at 12 centers in northern England), it was shown that about two-thirds of women who were scheduled for a primary SUI procedure would prefer Bulkamid over a sling when presented the option. Also, some physicians they spoke with had used other bulking products in the past, but most would admit the durability of results is not good (in many cases, results would last 3-6 months, and in a best case, around a year, according to conversations). Additionally, other physicians suggested that the bulking procedure has not been a very easy procedure to perform, but this new delivery system with Bulkamid makes it much more simple.

Back on June 24th, the company announced that it had submitted its PMA application to the FDA for its non-rechargeable Sacro NeuroModulation (SNM) system. Management anticipates receiving approval sometime in the 1H 2022, after which it will begin the commercial launch. Per Needham AXNX’s non-rechargeable system is expected to last at least 10 years, is 11 cubic centimeters in volume, incorporates constant current, and is full-body MRI compatible with 1.5T and 3.0T MRI scanners. The AXNX device is smaller and has twice the expected life of MDT’s InterStim II device. 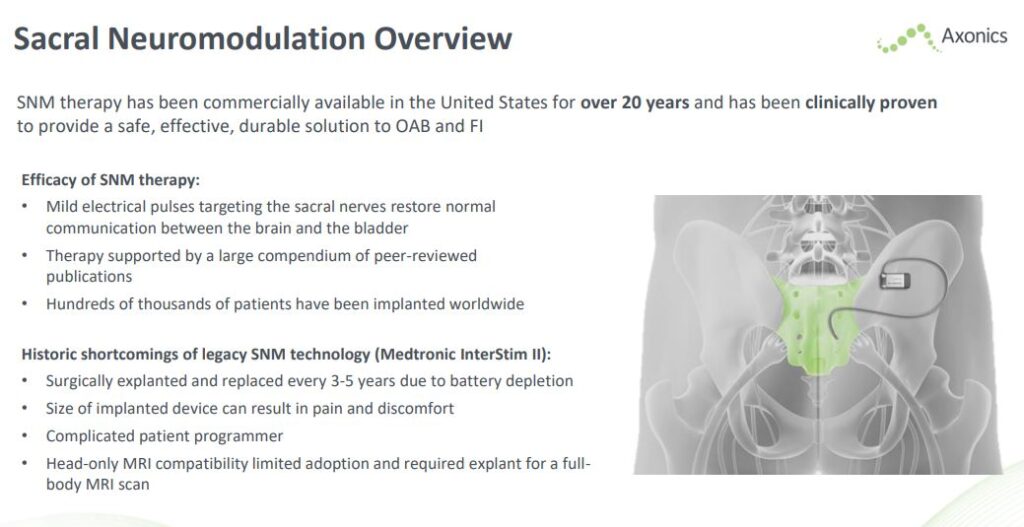 Truist would comment while the draw of the recent seminar was for Bulkamid, management spent about equal presentation time on its SNM portfolio. “We weren’t surprised by the positive commentary about the technology (as we’ve heard much of it before), but one item that came up as a theme that we think is underappreciated is simply the service level of the Axonics team (before, during and after the SNM procedure) and the company’s efforts to partner with physicians to expand patient awareness of SNM as an option.” Additionally, Truist thinks Axonics will be able to use Bulkamid to break into new SNM accounts in the coming months. Their sense is that this is already happening; out of the initial 300+ registrants for the seminar series, management suggested that over one-third may be potential new customers.

Finally, Guggenheim was out on July 6th saying that since they initiated coverage of Axonics in October, their call has been for investors to focus less on the competitive dynamics playing out between AXNX and MDT and more on the sacral neuromodulation market itself, which they believed would accelerate as both companies rolled out improved technologies. That thesis has played out over the past three quarters, during which they estimate that the U.S. SNM market has averaged 29% growth over 2019 levels despite lingering COVID headwinds. “As for the competitive tug-of-war, our data suggest that Axonics’ share fell from 32% in July 2020 to 16% in October (following MDT’s August InterStim Micro launch), but has since rebounded to 26%. With Axonics 1) still in the early stages of leveraging its recent Bulkamid acquisition to gain access to more SNM accounts and 2) on track to enter the primary cell segment of the market next year, we expect the company’s share to continue to drift higher.” 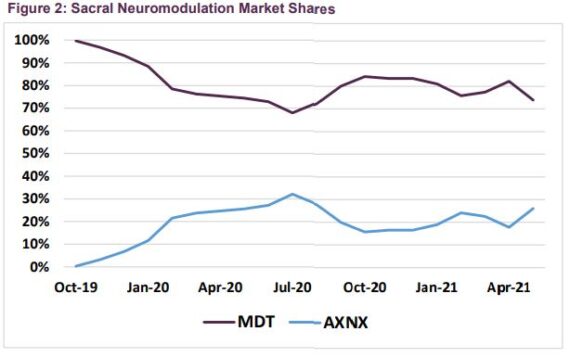 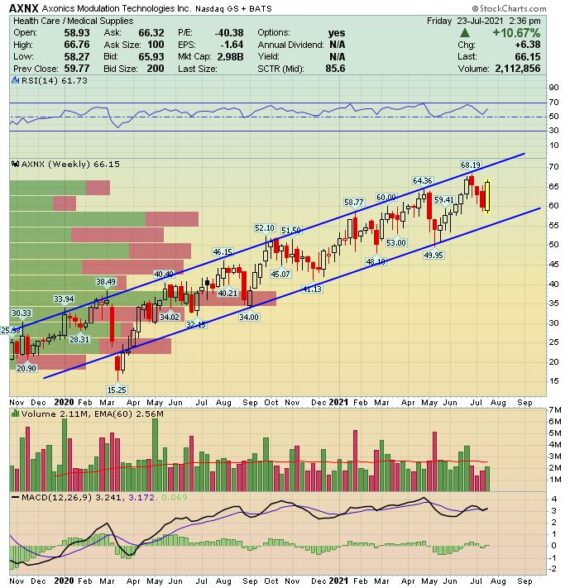