Behind The Numbers – AAR Corp. (AIR)

AAR is an independent provider of aviation services to commercial and government customers in more than 100 countries. As shown in the screenshot below, AAR operates under two reporting segments: Aviation Services and Expeditionary Services. Due to the mix of the business, AAR has established strong relationships with major domestic and international airlines, cargo airlines, regional airlines, original equipment manufacturers and a variety of federal and international governments.

As of this writing, shares are higher by nearly 7% after reporting earnings after the bell yesterday. Here was the breakdown:

Other highlights from the report and call include:

MRO Services – The company saw another quarter of sequential improvement driven by actions they had taken throughout FY 2019 to address the tight labor supply, such as enhancing recruiting efforts, partnering with various schools and repositioning elements of their workforce across their network. “Our customers have also continued to work with us to increase pricing, which has partially offset higher labor cost.”

Credit Suisse analyst Robert Spingarn would ask in the Q&A session how they are factoring in India into their MRO Outlook.

CEO John Holmes responded, “Yes. Our India JV, I think, we indicated last quarter that, we expected construction to be complete this calendar year. Based on what we know right now, we still look for that. We’re working to finalize the agreement with the customer. And once all that’s done, we’ll be able to give more color on how that will play into the results.” However, at this point, they did also say they weren’t anticipating any revenue as part of the guidance.

Pipeline Wins – As the company reminded everyone of their previously communicated strategy to shift to an asset-light GOCO business model, they entered into a definitive agreement to sell certain assets in their COCO business. In addition to executing on these and other prior awards, they also announced several new business wins throughout the year:

“Most recently, in the fourth quarter, we announced the extension of our engine support contract with MTU. We also received certification from the Japan Civil Aviation Bureau, the JCAB, that will expand our Japanese customer base and further strengthen the company’s position in Asia. Subsequent to the quarter-end, we announced an exclusive distribution arrangement with Woodward to support the U.S. military and a joint repair management contract with Global Aerospace Logistics, or GAL, focused on UAE military fleets.”

Stifel analyst Joseph DeNardi, in a post-earnings note, commented that the company should eventually benefit from American Airlines (AAL) and its 1,200 aircraft fleet becoming a potential customer as the airline is unlikely to sign a new mechanics contract without industry competitive flexibility to use independent MRO providers, like AAR.

Credit Suisse would say, “On the positive side, management indicated that AAR has an active M&A pipeline with deal(s) potentially to be announced later this year. We expect these deals will be either additive to organic growth or margin accretive to the company, or otherwise add IP to make the business more defensive.”

MAX 737 – Finally, following a question from SunTrust Robinson analyst Michael Ciarmoli regarding the Boeing 737 MAX, CEO John Holmes would say, “And as it relates to the MAX, we talked about that in the third quarter. And we’ve seen some shifting in the MRO schedule as a result of the MAX. And we have seen a slight, I’d say increase in parts demand as a result of the MAX, but nothing that really influenced the results, at least, in the fourth quarter. But certainly, that’s something that we’re monitoring closely.”

Before the company reported its earnings, it filed an 8-K that said it retained outside counsel to investigate possible violations of the company’s Code of Conduct, the U.S. Foreign Corrupt Practices Act, and other applicable laws, relating to the company’s activities in Nepal and South Africa.

“Based on these investigations, we self-reported these matters to the U.S. Department of Justice, the U.S. Securities and Exchange Commission and the UK Serious Fraud Office. We will fully cooperate in any review by these agencies, although we are unable at this time to predict what action, if any, they may take. Given that this is now an open matter with the government, we will not be able to offer further detail at this time.” 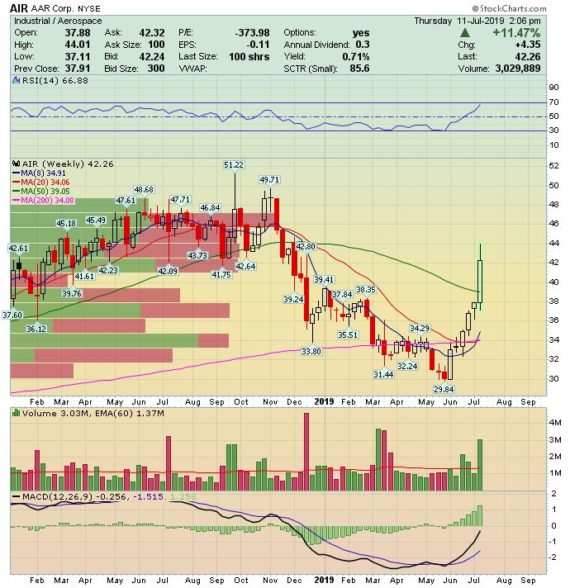