The Duckhorn Portfolio (NAPA), the California-based wine producer that we first wrote about back in February (See HERE), will be reporting their debut earnings next week on June 7th after the close. Bloomberg consensus is forecasting revenues of $76.1M, Adjusted EPS of $0.07, and Adjusted EBITDA of $24.5M. Here are several themes you will want to be paying attention to:

Luxury Wine – JPMorgan, in their preview note on Monday, noted that relative to the overall luxury wine segment, NAPA continues to outperform in the tracked channels as the overall luxury segment takeaway grew about +11.9% in the 13-week period ending May 1st vs. +20.3% for NAPA. The company has consistently outperformed the luxury wine segment, though the magnitude of outperformance has narrowed recently as NAPA laps outsized outperformance in the year-ago period.

Hedgeye analyst Daniel Biolsi, in a note this week, highlighted that wine bottles priced over $20 continue to perform well, with sales growing against the pandemic comparison. The average price of a 750 ml bottle increased to $11.70 compared to $11 last year, with the outperformance at the higher end.

Meanwhile, BofA was out with their preview note today updating their Decoy distribution analysis. “A significant portion of NAPA’s underlying growth through FY23 will come from expanded distribution of Decoy, which was about 47% of FY20 company sales. We expect Decoy to grow sales at about a 15% CAGR through FY23, contribution ~3/4 or 750bps of total portfolio growth over our forecast period.”

Fine Dining – Given NAPA’s luxury and ultra-luxury focused portfolio, the company has greater exposure to the on-premise channel than its peers, which in addition to its tasting rooms, should position NAPA as a beneficiary of the reopening theme. JPMorgan mentioned that NAPA has roughly mid-teens exposure to the on-premise, though the company is likely more skewed toward fine dining given its portfolio positioning, which is typically more reliant on tourism and business travel and has generally lagged the broader restaurant industry recovery. “Trends in the dining industry have improved in March and April following a tough January and February that was impacted by lockdowns and storms, and high-end steakhouse performance relative to 2019 is now actually modestly ahead of overall casual dining as of April. Specifically, relative to 2019 levels, high-end steakhouse comparable restaurant sales were up +5.1% in April from down -8.8% in March 2021, -22.6% in February, and – 35.4% in January, while overall casual dining comparable restaurant sales relative to 2019 were +3.1% in April from -3.5% in March, -20.5% in February, and -17.4% in January.” 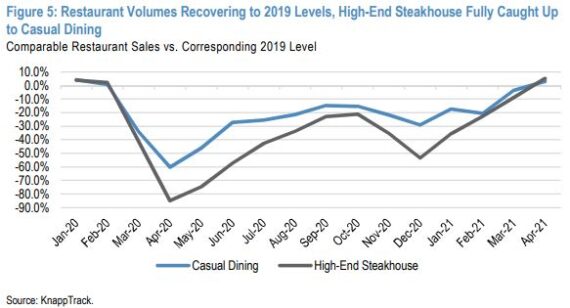 California – BofA analyst Peter Galbo recently co-hosted a U.S. spirits virtual field trip with in which one of the main themes was recovery of on-premise accounts. Pernod Ricard noted that the on-premise accounts in the U.S. have come back in a strong way, with May activity reaching levels the company was not expecting until October 2021. Campari management is anticipating a “revenge conviviality” in the medium term with consumers going out more often. “We will look for a similar update from NAPA management next week and note that, while still lower vs baseline 2019 levels, OpenTable and Google Mobility data in California (15-20% of NAPA sales are onpremise) have improved markedly in the past few months.” 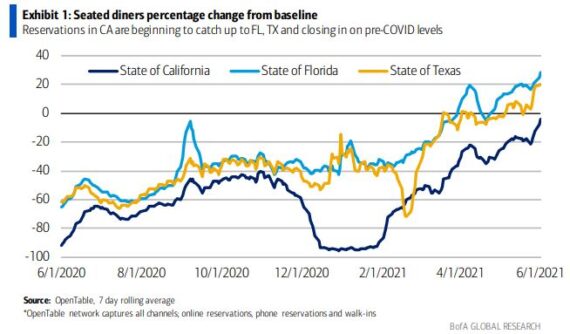 Inflation – The main input for NAPA are grapes, which are either sourced internally (~15% of gape volumes) or contracted on an annual basis (~85% of grape volumes). According to JPMorgan’s note, the 2020 harvest saw contracted grape prices down roughly 18% Y/Y (grape harvest usually runs from August-October). 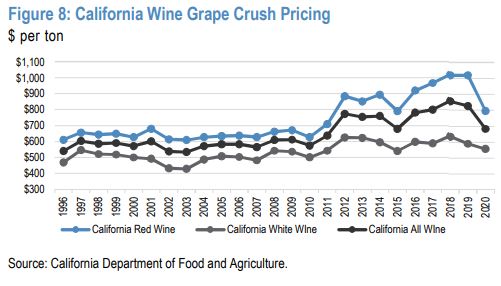 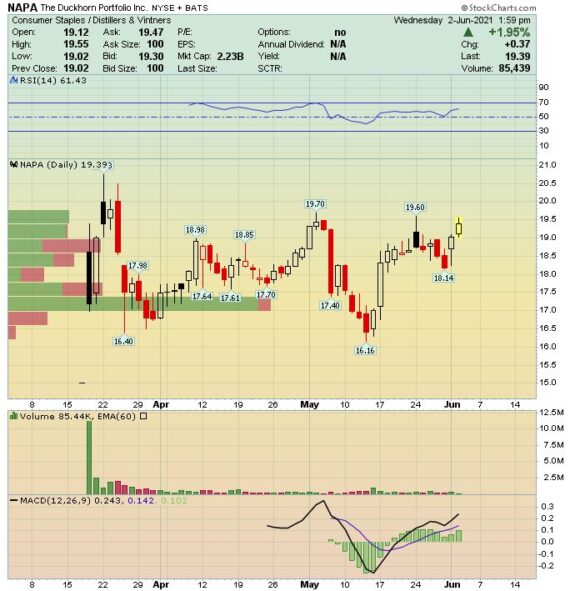