Shares rose 5% a few weeks ago after reporting Q2 results in which the company beat on both its top and bottom line:

CEO Jennifer Sherman, when discussing current demand, said they entered Q2 with backlog at record levels and lead times for certain product lines extended. As they moved through the quarter, their incoming order rates increased. Also, with sales travel fully resuming, they have seen a commensurate increase in equipment demonstrations. To illustrate, they were able to complete 125 demonstrations and presentations of their TRUVAC branded vehicles in June of this year which was double the amount performed in April and May combined and slightly more than in June of last year. Since April, they’ve also seen monthly increases in the amount of presentation and demos of their street sweepers and sewer cleaners. “This contributed to sequential improvement in average weekly order intake in both May and June. Weekly average orders in May were 16% higher than April, and weekly average orders in June were 24% higher than May. We are encouraged with what we have seen to date in July, with improvement in demand for sewer cleaners and safe digging trucks noted since June.”

The company is also monitoring developments relating to a potential infrastructure bill, which would be a catalyst for growth for many of their businesses. The proposed $1.5T bill that was recently passed by the House of Representatives, includes funding to repair roads and bridges, expand broadband access in rural areas and to rebuild and modernized American infrastructure with significant investments in public transit, the energy grid, clean water and wastewater systems, affordable housing, school and hospitals. The legislation also includes Buy America procurement requirements. “If such infrastructure legislation were to pass, with our various businesses, which support maintenance and infrastructure markets, Federal Signal will stand to benefit. Specifically, we would expect broadband and 5G fiber network expansion and electrical grid updates to drive demand for our TRUVAC line of safe digging trucks, which allowed for safely access to underground utilities and provide for limited disruption from directional drilling and fiber insertion. In addition, upgrades and expansion of clean water systems would increase utilization of our sewer cleaners as new waste stations and pipe upgrades would require cleaning.”

KeyBanc was out on Monday after hosting virtual investor meetings with management. During their conversations FSS indicated that activity continues to firm up, with sequential improvement in July and August relative to the end of Q2. Like most companies, FSS took dramatic cost actions as the pandemic unfolded. With activity resuming, KeyBanc thinks management sounded confident about navigating current challenges, investing in the business, and positioning for organic and inorganic growth.

FSS indicated that its total addressable market is approximately $6.6B ($4B for ESG and $2.6B for SSG), which suggests the company has 20-25% share in ESG and high single-digit share at SSG. That said, some parts of its business model are likely expanding, most notably Hydro-excavation, also known as safe digging. Given increasing adoption, FSS has been increasing its estimate for TAM from an original $250M to its current $500M in North America, and it may have opportunities to expand the product line into other regions. “We think Safe Digging resonates with investors given its LT potential, and FSS indicated the regulatory environment could be a catalyst as it is seen as a best practice for some applications.”

Finally, with respect to Aftermarket, FSS noted that just 5 years ago, the company primarily sold new equipment. Given its 45 dealers and 22 owned locations in North America, FSS wants to drive more business from parts, services, and the used market going forward. “We think it wants to expand its line of Specialty Vehicles via new product development and acquisitions, and it has reshaped its portfolio of Warning Devices by eliminating less profitable product lines and developing new products with acceptable return profiles.” 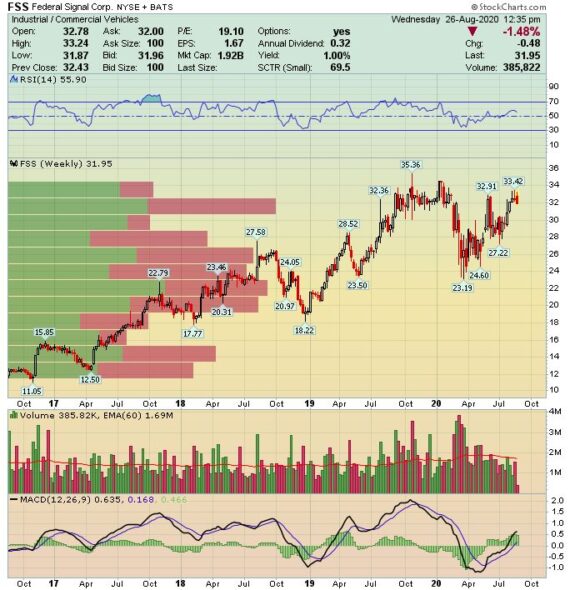