First Hawaiian (FHB), as you can probably guess, is headquartered in Honolulu, Hawaii and offers a diversified range of banking services to consumer and commercial customers. When looking at the landscape in the Aloha State, the market is quite consolidated with five banks holding 96% deposit market share. First Hawaiian and Bank of Hawaii (BOH) are tied at 34%, followed by Hawaiian Electric (HE) at 14% which, even though is a utility stock, has a banking segment. Then, you have Central Pacific Financial (CPF) at 11%, and finally Territorial Bancorp (TBNK) at 3%.

Before getting into company metrics, it’s worthwhile to highlight the tourism industry within the state, as its an important piece of the backdrop to Hawaiian banks, not only from a pure economic standpoint but also in terms of sentiment, which Keefe Bruyette & Woods expects will be a driver of Hawaiian bank stocks in the upcoming year and beyond.

Analyst Kelly Motta would comment, “Looking at visitor arrivals (Exhibit 10), as expected there was a sharp drop-off to near zero in 2020, which only started to increase in October 2020 with the launch of the Safe Travels Program. For domestic travelers, visitor arrivals have caught up to 2019 levels, though foreign travel is still muted. As a result, visitor arrivals are still tracking below 2019 levels in 2021 to date. That being said, we believe that Hawaii is likely viewed as a safer and more attractive destination than many other foreign alternatives, being at the forefront of safe travel as part of the United States and higher vaccination rates than the overall country. Additionally, Hawaii is the only state that requires a negative test for entry or proof of vaccination (or else travelers must submit to a 10-day quarantine), further bolstering Hawaii’s position as a relatively safer place to visit, in our view.”

Moving on to specific company metrics, it should first be noted of the potential rate environment we are currently in. KBW has two 25bp rate increases through 2023 (December 2022 and mid-2023), though after the Federal Reserve’s December meeting, the consensus view calls for a greater number of increases, setting up the group for positive revisions, particularly those with higher asset sensitivities. Of the 11 banks they are assuming coverage on this week, they believe the following will exhibit higher asset sensitivity than the group: BANR, BOH, CVBF, FHB, HFWA, and WABC. Of these, they believe FHB, HFWA, and WABC are the top three of these names in terms of most positively impacted in a rising rate environment, again largely due to of their outsized excess cash positions. Raymond James, who has a Market Perform rating on the stock, commented that as of last earnings, they are not including rate hikes in their forecasts. This potentially sets up for FHB estimates and ratings to move higher.

Loan Portfolio – FHB’s loan portfolio is best described as diversified considering its breakdown between commercial at 53% and consumer at 47%. Apparently, this is by design as FHB has sought steady, balanced growth. Over the longer term, this consistent approach has resulted in loans growing at an approximate 4% CAGR since 2014. When looking at the commercial side, FHB has the most experienced lending team in Hawaii (average experience >25 years). About one third is on the mainland, in part due to the shared national credit portfolio ($1.2B, or 10% of total loans). Additionally, FHB is the leading SBA lender on the islands. During the COVID crisis, FHB was able to leverage its SBA experience to quickly launch PPP, having originated over 10,000 loans for $1.4B in rounds 1 and 2. On the consumer side, lending is primarily on the prime and super prime end of the spectrum, and about 90% is collateralized. According to BofA, the company is anticipating strong residential mortgage loan growth during Q4 following the expected completion of 3 large construction projects.

CEO Bob Harrison remarked, “There is an anecdote for this quarter that we’re in now, there’s a couple of large projects here on Oahu that will finish and so we will see commercial real estate, construction balances decline, but those will be more than made up for by the take out loans that we’re doing on the residential side on those same projects.” 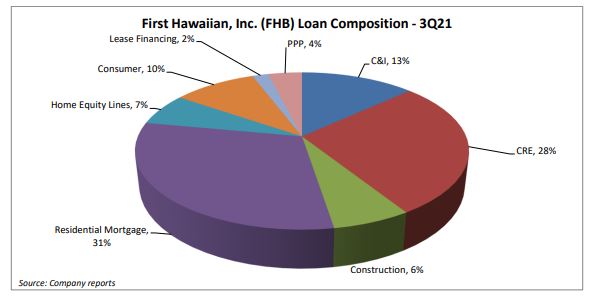 Digital Transformation Journey – CEO Bob Harrison commented on the last earnings call that they are continuing their investment in technology. JPMorgan analyst Steven Alexopoulos, in a SMID Bank industry note on December 15th, said that although the primary focus remains on the return of loan growth related to FHB shares, they point to First Hawaiian as now being full steam ahead on a digital journey.

When it comes to the starting point for a digital transformation journey, JPMorgan notes that First Hawaiian was initially somewhat constrained as compared to its mainland peers, largely due to the operating structure the company had been under with BNP Paribas as a parent. With First Hawaiian now being fully separated from BNP Paribas, however, the company has now embarked on a digital transformation, starting with a core system upgrade that is now underway. As part of the core modernization process, First Hawaiian is also building API structures while migrating data to the cloud with this likely to serve as an enabler for the company to fully control and make smart usage of its data. First Hawaiian partnered with MX Technologies, a money management and data analytics fintech, to renew its personal financial management platform that is now capable of automatically creating budgets on behalf of customers based on past spending behavior as well as making predictions on future spending by leveraging AI-driven predictive analytics. While it’s still early, the company mentioned on the July earnings call that it had seen a +500% increase in active users for one of its new tools, MoneyMap, vs. the previous offering.

“Although this is still in the early innings, we view that First Hawaiian’s ongoing digital journey should position the company to have a better insight into customer data as well as the ability to roll out innovative products, allowing the company to further improve customer experience down the road over the longer term.” 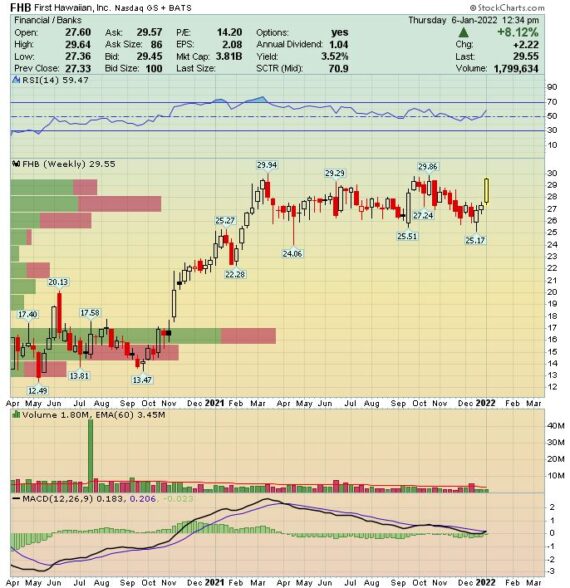