**This is our weekly Consumer note that goes out to Jaguar clients every Sunday. It is typically sorted by weekly performance metrics (not featured here), insider activity, c-suite changes (new addition), and industry news.**

-According to Mastercard SpendingPulse, October U.S. retail sales (ex-auto) increased 9.5% Y/Y and 23.6% compared to October 2019. E-commerce sales in October grew 12.7% Y/Y and 96.0% from 2019. Experiential sectors including Restaurants, Airlines and Lodging all saw double-digit growth compared to both 2021 and 2019. “In October we saw the strength in the labor market continue to support consumer purchasing power,” said Michelle Meyer, U.S. Chief Economist, Mastercard Economics Institute. “Coupled with heavy online promotions, consumers got a head start on their holiday shopping, fueling another strong month of retail sales.” 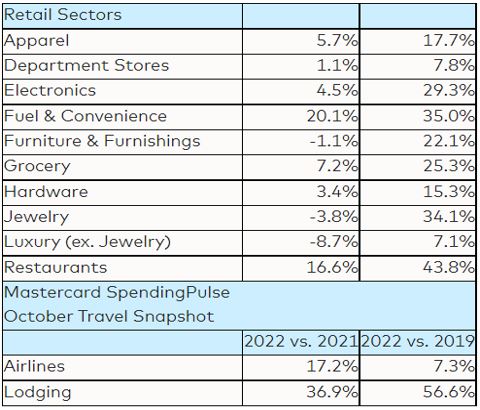 –Dick’s Sporting Goods (DKS) will be reporting earnings on Tuesday, November 22nd before the open and BofA sees potential upside vs. consensus EPS of $2.21 driven by same-store sales upside given: Foot traffic according to Placer (92% correlated with DKS traffic comps) accelerated approximately 4pts vs. last quarter. They believe DKS should also continue to see an uplift in avgerage transaction size given better in-stock levels of high tickets items vs. out of stocks last year. Meanwhile, web traffic accelerated to +5.4% in Q3 vs. -5.1% last quarter. They also see gross margin support vs. consensus as they expect less merchandise margin compression vs. 197bps last quarter given a sequential deceleration in the % change of footwear & apparel SKUs discounted online. Finally, a potential negative is that BofA expects a soft start to the Holiday season with QTD foot traffic (through 11/11) decelerating 6pts as DKS is lapping a pull forward in Holiday spending last year. 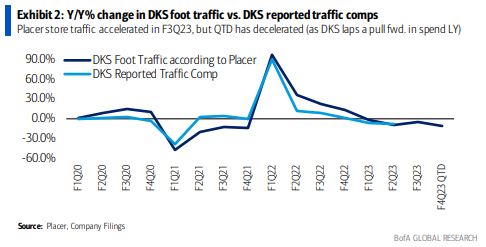 -On November 17th, Hasbro (HAS) announced that it was initiating a sales process for part of its eOne TV and film business that “do not directly support the company’s Brand Entertainment Strategy.” The company already sold off its eOne music business last year for $385M. Stifel views this as a step toward simplifying operations, while providing proceeds to further delever, which has been a priority, and potentially freeing up cash flow with the expected reduction in program product costs. We made Hasbro a Top Short in the Q3 Outlook and at this time, we continue to remain bearish, especially following recent channel checks regarding Magic: The Gathering, which were discussed in Conversations on November 14th.

-On November 16th, Restaurant Brands International (QSR) announced the hiring of Patrick Doyle as its Executive Chairman. If the name sounds familiar, it should as Patrick Doyle is the former Domino’s Pizza (DPZ) CEO who was in that position from 2010 to 2018 and was instrumental in the company’s success. During his reign, Domino’s posted 29 quarters of positive comparable sales.

BofA would say that Patrick Doyle’s appointment comes as QSR attempts to turn around the Burger King U.S. business – and sustain the COVID-driven momentum in Tim Horton’s – at a time when BK franchisee economics remain under significant pressure. “While the company has articulated a strategy of improving the guest experience, digital sales and franchisee profitability, we have viewed the magnitude of investment as potentially insufficient. Given Doyle’s willingness to invest behind growth at DPZ – and the performance that resulted — we are optimistic that he will provide the support for QSR executive leadership that has been lacking.”

-The 2022 Restaurant Finance & Development Conference recently took place in which BMO Capital said that conversations with participants were marked by a wide range of opinions about the medium-term outlook for the industry. As it relates to individual companies, they highlighted that after extrapolating franchisee conversations, Papa John’s (PZZA) Q4 North American franchise same store sales growth may be tracking slightly below consensus of +1.8% (they estimate closer to +1.25% to +1.50%). They also said:

• Delivery driver availability is improving, but the degree of challenges varies by market. One operator indicated driver openings are down 50% from the peak and the shortfall is not limiting sales. Another believes staffing shortfalls are limiting sales by double digits.

• Operator are hopeful for impactful new product news on the horizon, but BMO didn’t get the sense these operators have visibility of new product specifics at this time.

-In Conversations on Wednesday, Chronicle discussed chicken prices and the read-through for both Wingstop (WING) and Tyson Foods (TSN). Regarding Wingstop, it should be noted that Truist conducted their analysis of WING’s menu, which suggests that franchisees have increased menu prices by approximately 7% Y/Y at the end of October, which runs counter to some investors’ perceptions that franchisees are taking no price. 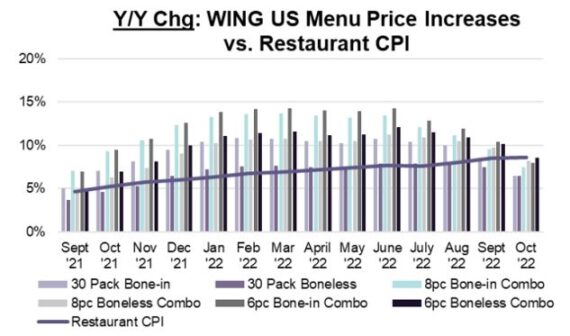 -This past week, The Wall Street Journal reported that Southeastern Grocers, which operates banners such as Winn-Dixie, Harveys, and Fresco y Mas and serves communities throughout Alabama, Florida, Georgia, Louisiana, and Mississippi, has entered into talks with prospective buyers. This company originally made a bid to go public in the fall of 2020 at a time when pandemic-fueled demand was driving record sales growth for food retailers. However, it postponed its campaign just a few months later and officially withdrew its filing last October. This news also comes on the heels of Kroger’s (KR) bid for Albertsons (ACI), a deal that is already going to face a lengthy review process by regulators. 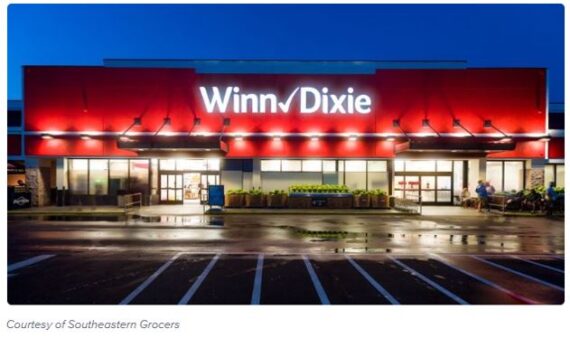 -This past week, Estee Lauder (EL) made it official by announcing it will acquire Tom Ford, a luxury fashion house, for $2.8B. This will be Estee Lauder’s largest deal to date Expectations are for minimal transition disruption in the non-beauty portions of Tom Ford, as Marcolin will continue to be the brand’s eyewear license partner while fashion brand Ermenegildo Zegna (ZGN) will continue as the brand’s fashion, accessories & underwear partner.

Raymond James said the acquisition is expected to be accretive to EL’s top-line growth as Tom Ford Beauty sales grew 25% in FY22 and have grown at a double-digit CAGR from 2012-2022 vs EL at +8% in local currency and +6% in dollars over the same time period. Estee Lauder expects Tom Ford Beauty’s annual sales to reach $1B over the next several years. “Given Tom Ford’s super-premium positioning in Beauty, we believe the brand should continue to be a growth driver for EL, with the brand’s fragrance line ranking #15 in the U.S. and #10 in China, while increased door expansion and consumer mobility should support makeup growth.”

-In case you missed it, on Wednesday, November 16th in Conversations, a high-level discussion was presented on luxury retailers where channel checks are starting to possibly show signs of cooling off. Therefore, there are many names that could see their charts start to crack as momentum fades after the recent rally. In terms of channel checks, I provided the following commentary from RBC Capital analyst Nik Modi:

“Unique website visits to the selected basket of ultra luxury good websites have been outpaced by conventional retail (e- commerce and big box stores) for nearly five months now (luxury click volume has fallen 11% vs Jun’22). In the past, the DIS team have used unique visits to charitable websites as a proxy for high end consumer wallet pinching. Unique hits to the 10 largest charity websites have eased since the summer highs. While interest in both luxury retail and charitable giving remains abnormally strong notionally, the process of normalization has likely begun. Interestingly, we have seen indications of luxury to broadline substitution between June and August where luxury clicks decreased by 4.7% and broadline retail increased by 5.6%. In aggregate, overall, luxury and broadline retail sites have experienced a 4.5% decrease in clicks so far this fall.” 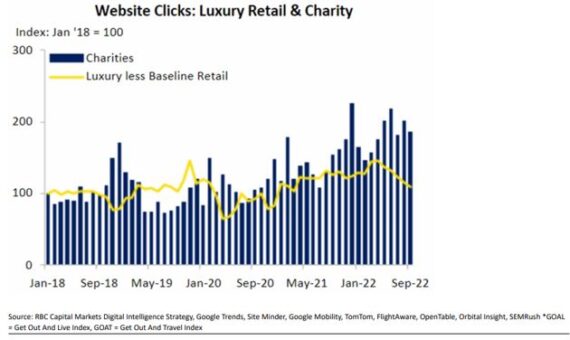