For those who are on Telegram messenger where we discuss all kinds of action after hours (it’s free and you can join HERE), I have a message pinned there for past 6 months talking about my three highest conviction long ideas: DKNG, SPCE, SPOT. It’s one thing to just talk, another thing to act and lead clients. Here is anatomy / history of how we’ve been trading Spotify since then: 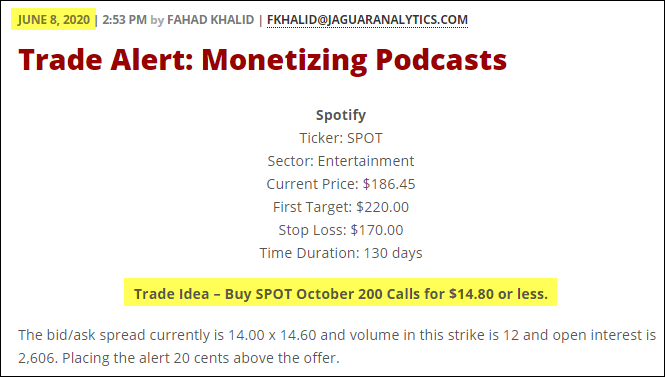 June 18th – After further review of how streaming services are gaining momentum during covid-19 world, the future of podcasting which will come with its own set of advertising platform, Joe Rogan deal and conservative sentiment and earnings estimates on the street, I came to realization that stock is just too cheap to ignore. So, we embarked on aggressive bullish position and did something that we have never recommended to Jag clients before. We introduced “Roll and Double” model. Simply stating, at each interval when we roll calls, we would double the number of contracts. That first roll happened on June 18th. Our cost basis for October 200 calls was $14.80. We closed them for $37 (about +150% gain) and bought October 240 / July 270 diagonal spread for $16 with twice the number of contracts … hence why its called “Roll and Double.” See trade HERE or snapshot below.

July 2nd – A few weeks that diagonal call spread was going for $36.50 versus our cost basis of $16 as stock kept ripping higher. So, we issued another alert with another “Roll and Double.” This time we closed October 240 / July 270 diagonal call spread for $36.50 (about +128% gain) and bought October / July (31) W 300-strike call calendar spread for $12 while once again doubling the number of contracts. See trade HERE or snapshot below. 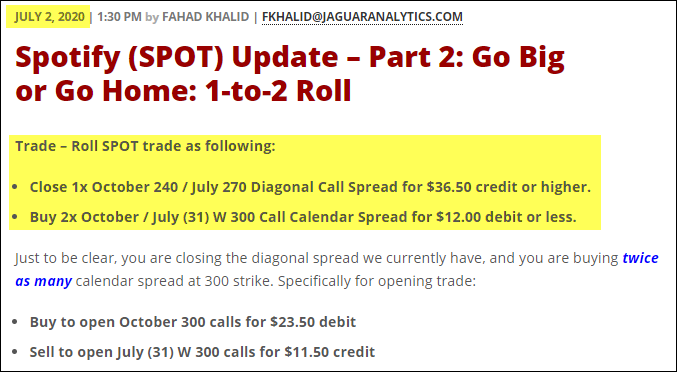 July 31st – Then stock went into several months of consolidation. Each time coming up to $290 level but failing to breakout. This was starting to give us headaches. Naturally with all these rolls and doubles the size of position had increased significantly. But we didn’t want to give up on what still remains a high conviction trade. So, prudently, we decided to take small loss in October 300 by closing at $10 versus cost basis of $12 (about -16% loss) and rolled the position out to January 300/350 call spread for even money while keeping the same number of contracts in play this time. See trade HERE or snapshot below. 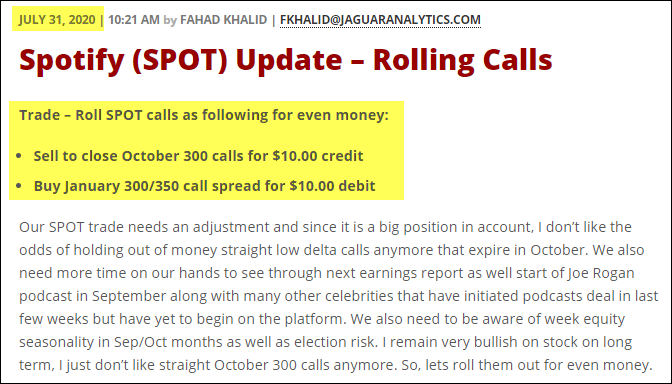 November 20th – Then several months went by and stock was still struggling to breakout through $290 to $300 resistance. The slow and steady decline in implied volatility and theta decay led to the short leg of January 300/350 call spread to come down to just $1.40. So, we sent another email last week to close the short leg and continue to hold straight January 300 calls for adjusted new price of $11.40. See HERE or snapshot below. 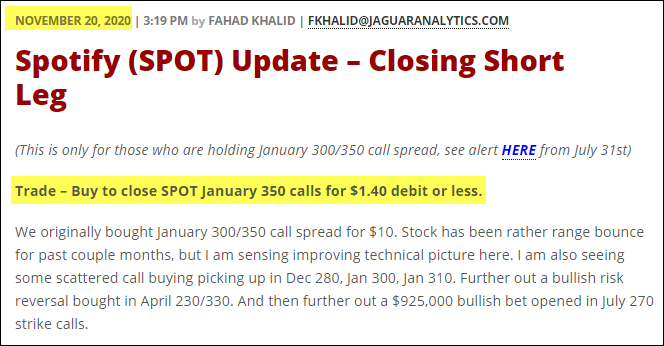 December 2nd (today) – Now we finally have the breakout that we had been waiting for. Massive spike in stock as it blows through $300 resistance and now trades at $330 up +15% in one session. You can imagine what that means for portfolio that was holding straight January 300 calls after several rolls and doubles. So, moments ago today we issued an alert to close January 300 calls for $29 credit (about +154% gain) but this time finally reset the size back to normal and something that is manageable again, as it had just gotten too big for portfolio to handle. Now, I am not going to tell you where we rolled these calls to. That is blacked out in snapshot below or see trade HERE.

So, that’s where we are right now. Massive win in past 6 months. Each time rolled position and size doubled in terms of contracts (except last tranche) while banking triple digit percentage gains each time as position got bigger and bigger. SPOT still remains one of our highest conviction long ideas. I believe people continue to underestimate the potential in podcasting business, the ad-supported model that will likely be introduced in 2021 and trajectory of growth in audience. I also expect podcasting to go from audio to video format in near future. It’s a pipe for anyone to reach their followers and monetize with ease and without the ugliness of bots and negativity that floats around other social media properties such as Twitter and Facebook. The market of podcasting remains wide and big and we are still only scratching the surface. 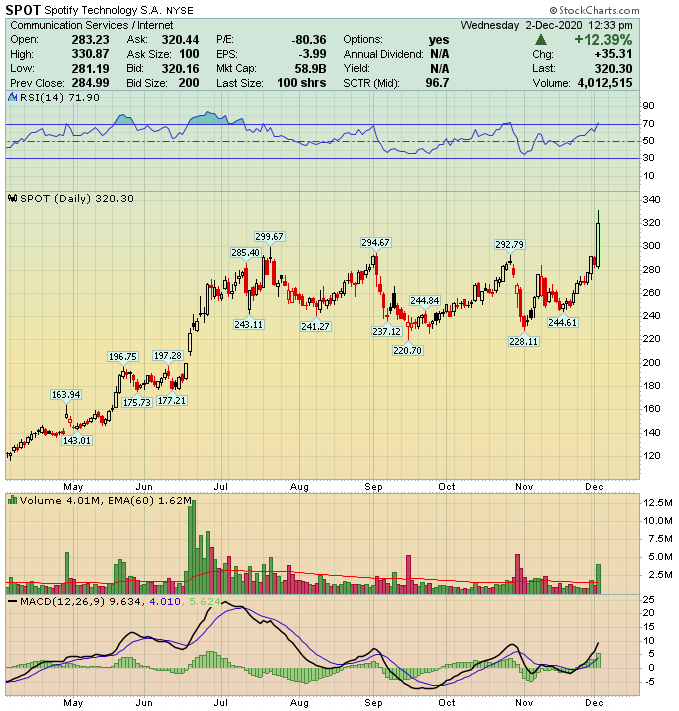