Edwards Lifesciences (EW) – Buyers of 2,000 October 150 calls paid up to $7.50 and buyers of 1,400 October 155 calls paid up to $6.00. Some call buyers were active in November as well along with November 135 put sales. Implied volatility finished sharply higher by 42% and the technical breakout was a complete stand out in market today with stealth and steady rally all day. Call and share volume was 15x and 2.6x daily average volume, respectively.

We believe there are three reasons why EW stock is running and will continue to run:

1) A lot of reports circulated on August 31 that Abbott Labs (ABT) is looking to make large acquisition in life sciences space and St. Jude Medical (STJ) was seen as primary target. Those rumors were immediately denied. Now chatter is ABT may go after EW.

2) On September 28, RBC Capital met with management and walked away with several bullish views on the outlook. Next up coming catalyst is the TCT Conference, which will be held in San Francisco on October 11-15. We expect EW to share one-year Sapien 3 data in high-risk cohort at TCT, which we expect to be positive and continue to show low rates of all-cause mortality, stroke, and paravalvular leaks than other devices. 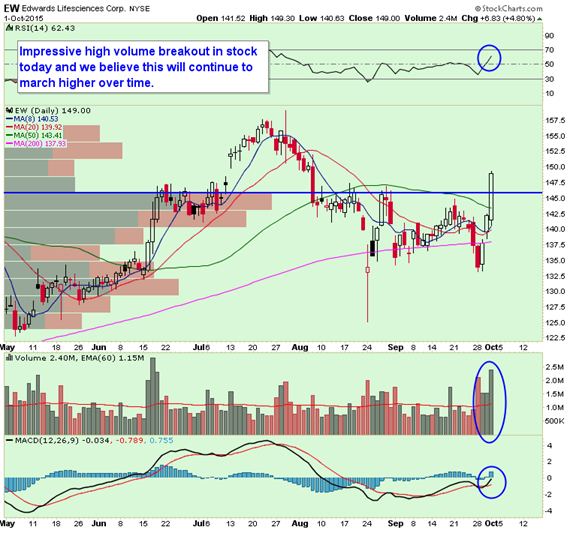