Back on March 20th in W/E Research, a bullish case was presented for this small cap biotech company which is focused on novel therapies for rare and orphan diseases. More specifically, it has an FDA-approved drug called Livmarli, which treats patients with Alagille Syndrome (ALGS) one year of age or older.

Back in Q4, the company reported $3.1M in Livmarli revenue and set U.S. net sales guidance of “at least” $8M for the next quarter. On Thursday morning, the company reported its Q1 earnings and said that Livmarli revenue came in at $10.9M, well above the $8M guidance and analyst projections (JPMorgan was at $8.4M). Total revenue, meanwhile, came in at $12.9M that also beat estimates of $8.5M. On the conference call, management indicated they are on track to come in “comfortably” above the $50M floor previously provided for 2022 and that $50M should in no way be considered guidance.

COO Peter Radovich, in his prepared remarks, made sure to point out that there is no inventory in their reported product sales. “Thus, the revenue number here is a true representation of demand.”

Looking ahead of Q2, management expects 90% of patients to be on the reimbursed drug. So far, management has seen consistent refills amongst those already on therapy, with a similar compliance to that of the Phase III trial. According to JPMorgan, “Based on our physician feedback, patients currently on therapy appear to be those with more severe pruritus.” However, management expects this to broaden out over time.

Turning to their international markets, the company remains on track to receive potential EMA approval by year-end. In anticipation of this likely event, the team is initiating early access programs now while ensuring readiness for launch in key European countries. COO Peter Radovich would say that at a high level, following EMA approval, the first country they’re launching is Germany. Then, over the course of 2023, they plan to launch in France, Italy, and hopefully the U.K.

Chief Scientific Officer Pamela Vig would go over the company’s upcoming catalysts (not much has changed since our W/E write-up).

“Most notably, we expect top line data from our MARCH-PFIC Phase III clinical trial in the fourth quarter. As a reminder, the MARCH-PFIC study, now fully enrolled, includes multiple PFIC subtypes and higher doses than the Phase II INDIGO study, which was the basis for breakthrough therapy designation. And the MARCH study is the largest randomized Phase III clinical trial ever conducted in PFIC with more than 90 patients enrolled.”

“Moving to the rest of our pipeline, we have 4 additional indications under evaluation in cholestasis. By year-end 2022, we’re expecting 2 interim analyses from our volixibat programs. The first interim analysis will be from our Phase IIb VISTAS study, evaluating volixibat in patients with primary sclerosing cholangitis. And the second will be open-label data from our Phase IIb OHANA study for patients with intrahepatic cholestasis of pregnancy.” 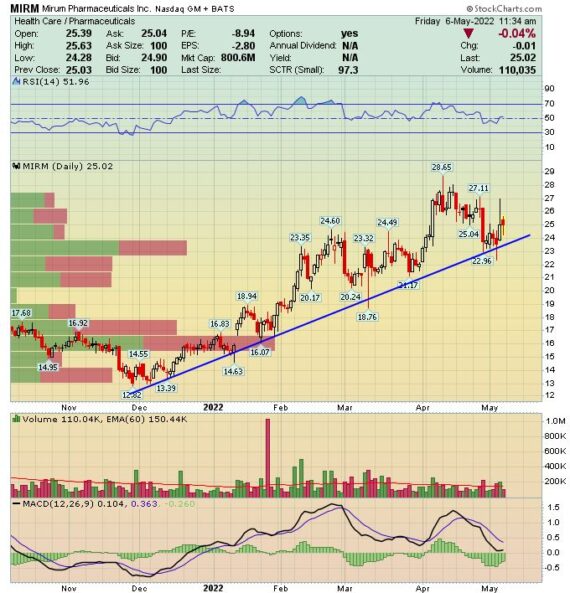