Back on June 5th, a bearish write-up for CarMax (KMX) was presented in W/E Research with a one-month time horizon. Option flow via JaguarScan as well as channel checks from Guggenheim were used. At the time of the write-up, shares were trading at $96.35. Fortunately, this was an idea that worked out right away as the stock would hit a low of $84.37 on June 16th. Then, on the morning of June 26th, the company reported its Q1 earnings that beat on both EPS and Revenue. However, it did say that it sold 427,257 units through its combined retail and wholesale channels in Q1, a decrease of 5.5% from the prior year. Retail used unit sales declined 11% while wholesale units increased 2.7%. The company attributed the unit sales weakness to lapping of stimulus benefits from the prior year, broader inflationary pressures and challenges to vehicle affordability, and waning consumer confidence, although BofA suspects a tight inventory and procurement environment may have also been a factor. Going forward, BofA expects SSS performance to remain volatile.

Fast forward to Conversations on July 5th when the bear case was reiterated:

“Reiterating bear case for CarMax (KMX) and anticipating a technical breakdown in chart below $85 support as I believe even the weak channel checks are not fully capturing deteriorating growth and valuations remain too high at 20x EV/EBITDA.”

I’m bringing this name back up because of recent comments made by Wedbush analyst Seth Basham in a note dated July 18th. The analyst would highlight that CarMax Auto Finance (CAF) reported securitization trust data for the month of June.

Wedbush goes on to say that they are most concerned with recent ABS vintages (since 2021), where loss rates are on par with pre-pandemic vintages, but delinquencies are very elevated and collateral underpinning these loans is more at risk of loss in the event of default due to the high auto prices at the time the loans were written. Moreover, a higher mix of lower-FICO score loans in the 2021 vintages (vs. 2020 vintages) add more risk. In parallel, they previously noted very unfavorable pricing of CAF’s most recent prime ABS deal, 2022-3, with collateral spreads the worst in the history of our data. This trend will negatively impact net interest margins in the coming quarters. “All in, we continue to expect CAF income to continue normalizing from peak levels over the next two years. Despite a widening competitive moat for KMX, market forces pressuring used car sales and auto finance income keep us Neutral on KMX.” 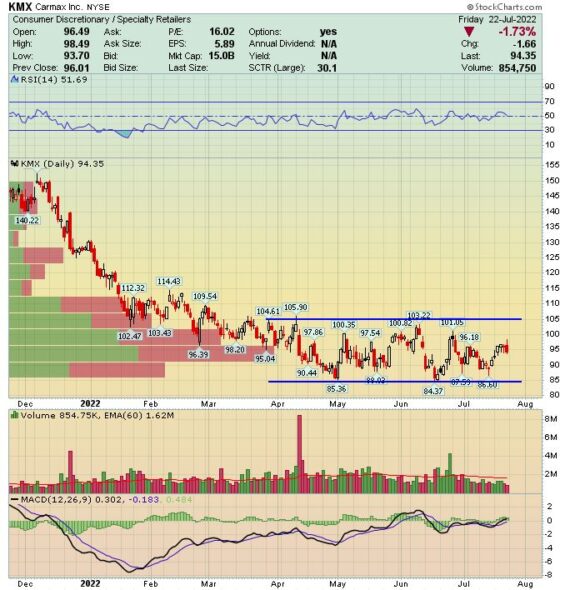