Outfront Media is one of the largest providers of advertising space on out-of-home advertising structures and sites across the U.S. and Canada. Its inventory consists of billboard displays, primarily located on the most heavily traveled roadways, and transit advertising displays under exclusive multi-year contracts with municipalities.

We haven’t covered this name in quite some time. The last full write-up was way back in September 2017 on the JaguarAnalytics Home Page, which can be found HERE.

Taking a look at the breakdown of Q1 earnings, which were released on May 7th, we see:

CEO Jeremy Male would say, “While billboard growth was solid, transit growth was exceptional, driving our outperformance. We had growth in both static and digital. National [advertising] and local saw the strongest growth we’ve ever posted.”

On the conference call, management would focus on its MTA progress, in which they said this was another big deployment quarter with 735 new displays installed, bringing their total to nearly 2,000. “For those of you in New York, you’re probably seeing these sprouting up key passionate touch points in Manhattan. They really stand out and are proving to be very popular with our advertiser base.”

Additionally, management commented that you may have noticed that not all of these displays carry advertising. Advertiser screens are under 50% of the total to date, but they will ultimately trend to around 85% to total deployment.

Goldman Sachs analyst Andrew Borst would ask some follow-up questions on MTA deployment in which Outfront’s CEO would say, “We’re roughly running at a run rate that we expect to do throughout the year for the next few years. So it’s about 10 stations a month or 30 stations a quarter. The actual number of screens will depend on which stations and what the configuration is. We think this is roughly our run rate for the next few quarters going forward.” 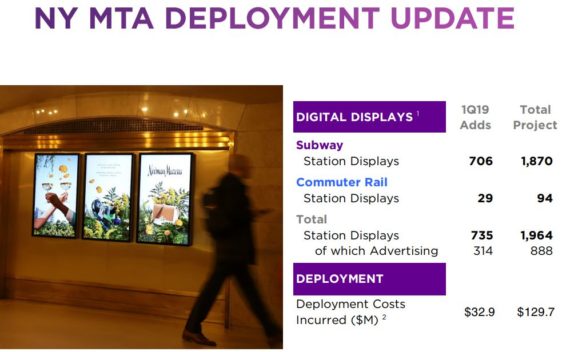 Another area of strong growth for the company was via their continued digital expansion and focused execution at the sales level.

Digital revenue growth was 22% in the first quarter, and this represented more than half of the company’s growth. Digital billboards were up 12%, while digital transit was up 60%, a phenomenal growth rate driven by our rapid expansion of digital displays in New York, Boston and other markets.

“We’ve digitized a relatively small percentage of our assets, 2.5% of our billboards and under 1% of transit, but this is now driving 17.5% of run rate revenues, up over 2 points from last year. We believe that we have a long runway ahead of us in terms of the benefits of digitization.”

Last night, Oppenheimer analyst Ian Zaffino was out with a note following management meetings with the following key points:

• Following solid Q1 growth, National should accelerate sequentially. Transit has started to ramp nicely, and Outfront has grown share through the digital display rollout, among others. OUT is also enjoying a recently revamped national salesforce, which has helped facilitate better conversations with agencies/advertisers about OOH’s effectiveness. National advertisers remain underrepresented in OOH in larger markets (a key focus for OUT).

• Digitalization remains a key driver for both billboards and transit. Digital currently makes up ~20% of revenues, but grows mid-20s%. There is still meaningful room to grow digital, and management will increase digital to ~25-30% of revenues, in-line with US peers, but well below UK operators at ~50%. We model ~100 board conversions annually, but note this could accelerate to ~150.

• Outfront continues to invest in IT and big data (e.g., $18M in FY2019). The company has developed a platform that integrates real-time population statistics/ demographics with billboard locations to provide clients/agencies a more effective (and interactive) buying experience. The system will also provide a centralized platform to facilitate seamless trading and booking of billboards.

Finally, taking a look at JaguarScan, we will find that there are two small trades still in open interest: 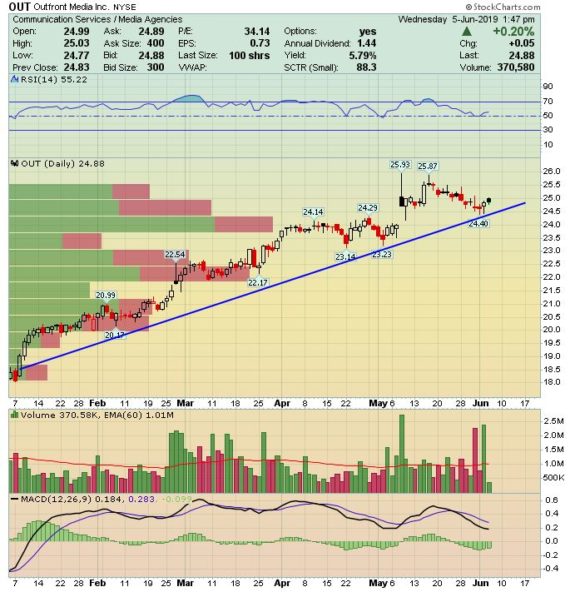